WHERE TO FIND THE PIKE AND HOW.

In winter, pike are not as active as in spring or autumn, but still the pike, too, like all the other fish looking for food. In the winter pike prefer to catch on to the imitation fish and baubles and balances.

In the winter the pike is not always possible to meet as pike throughout the winter season changes the Parking areas, but where it is depends on the forage pike , namely small fish, the so-called food. In the absence of fodder , the meeting with the pike will not take place , only if some kind of crazy drop in on the place where fishing happens. When searching for pike is taken into account every detail , and this in the first place. 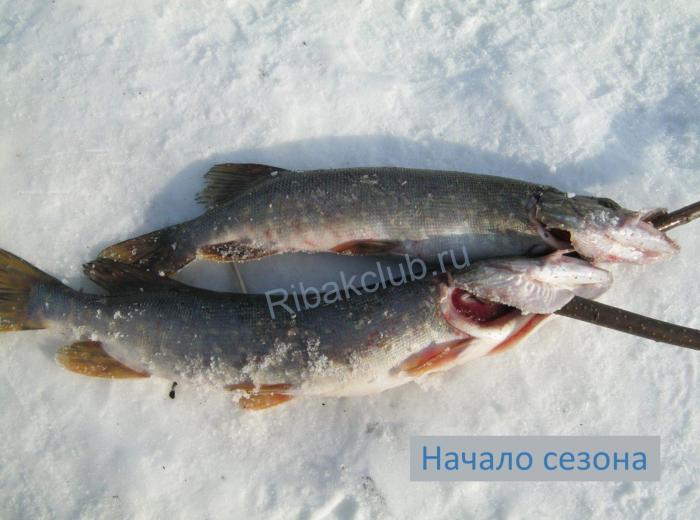 Before the ice pike prefers to move away from shallow waters into the deep places of the reservoir. Unlike pike, not all the inhabitants EN masse go to depth , such as perch and roach with the first edge on the shores of lakes and ponds begin a reverse movement to the shallows.

It all happens for a reason. The coastal zone until the freezing of the pond is perfectly visible from the shore and is fish there is dangerous because of the predators that can attack from land or from the air, and now the ice a fish hides from the prying eyes of a predator. In spite of what is happening, even larger species of fish, the ones with the depth of the pond is difficult to expel, this time making a foray with Yam in the shallows. The beginning of the season

Realizing that in the coastal zone , it waits for the meal, the pike is rapidly moved to the area. When the first ice looking for the shark near the coastal thickets of water vegetation , as well as in Karajygach. The middle of the season

The middle of the winter fishing season means that the ice is strong. Begins to decompose and decay of aquatic vegetation and the oxygen concentration drops sharply , which undoubtedly affects the existence of fish. At this time all fish leaving the shallow parts of ponds and moved to deep water and pike in particular , as mentioned earlier , where forage base , there is the pike. All this is not happening in one den , but gradually, depending on the situation under water. At this time pike is found in the pits and eyebrows. It is also worth noting that this period is called gluhozime and the deeper the pit the greater the chance to catch a pike. But , again, not forget about the oxygen , because for fish it as needed as we, and where is the situation with oxygen is more optimal , success in the capture is guaranteed. Name gluhozime speaks for itself , t pike catch in this period more difficult than the rest of the time.

What is the latest ice? No , that’s not what ice does not , it is the onset of warm days where the snow and ice gradually melting and going fishing don’t need too much to dress warmly , but security here is taken into account , as ice becomes brittle and it would seem that two weeks ago at your place was a good place to fish , during this period there may be not safe. And here is the trick , where here the ice will begin to break down , in these places , more oxygen-enriched , is trying to take the pike, and have something to eat, because not only is she moving there , as well as all the other inhabitants of the fish fauna , mostly small fish. And as soon as there are open stretches of water , the capture of a pike moving into the final stage. It remains to wait for more extensive melted areas where it will be possible to catch a spinning.